Large businesses often have their own IT teams. Smaller businesses tend to have the unfortunate soul who happens to know a bit more about IT than his or her colleagues – let’s call him Bob.

Bob is the guy that people call when their computer goes slow, their phone stops syncing their email, their printer chucks out a load of gibberish or their Facebook refuses to load at lunchtime. He’s a happy, go-lucky kind of guy and he’s very happy to help. There’s a satisfaction in fixing things, and Bob gets that warm, fuzzy feeling every time he makes someone smile. Bob loves his job.

However, this isn’t Bob’s job at all. Bob isn’t here to fix Facebook, troubleshoot the WiFi, create new users in Office 365 or update the privacy policy on the web site. In fact, Bob’s job title is ‘Company Director’.

In reality, Bob has lots of important things to do. None of them are associated with IT Support – but Bob finds helping out with IT do be an enjoyable distraction. Does this sound familiar?

It’s amazing to see just how many people spend their valuable time in an IT support role when their job is actually something else. Time spent fiddling with things Bob barely understands is a considerable risk to the future of his business. This is time that he should be using for business development. He takes at least twice as long to fix each issue as a professional would do, too. This means twice his time, and also twice the time of the person he is helping.

The solution is simple. Bob outsources his IT issues to a reputable, accredited online IT support company. He suddenly realises that he can easily recoup the money he spends on outsourcing, and more besides, through higher productivity in his own business. The online IT support company have highly experienced engineers who dramatically reduce the down-time that his staff have been used to during fixes – which makes them more efficient at their own job, and able to earn more money for the business.

He may be a very clever chap, but the quality of each solution is now much better than Bob could have achieved with his managerial, financial and marketing background. In fact, critical and complicated areas of the system have now been identified as causing the vast majority of Bob’s support calls, and the fix is pretty straight forward for the online IT support engineers.

So, if you haven’t already guessed, there’s a moral to this story. If you want to make your business efficient, then let the IT experts do the IT jobs, and let everyone else do theirs!

Contact us NOW to discover how a partnership with Your Computer Department can improve your productivity and profitability. 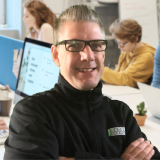 Eddie Palmer is the founder of Nottingham-based Your Computer Department.

Your Computer Department is based in Beeston, Nottingham and provides online IT support services across the UK – accredited by CompTIA.